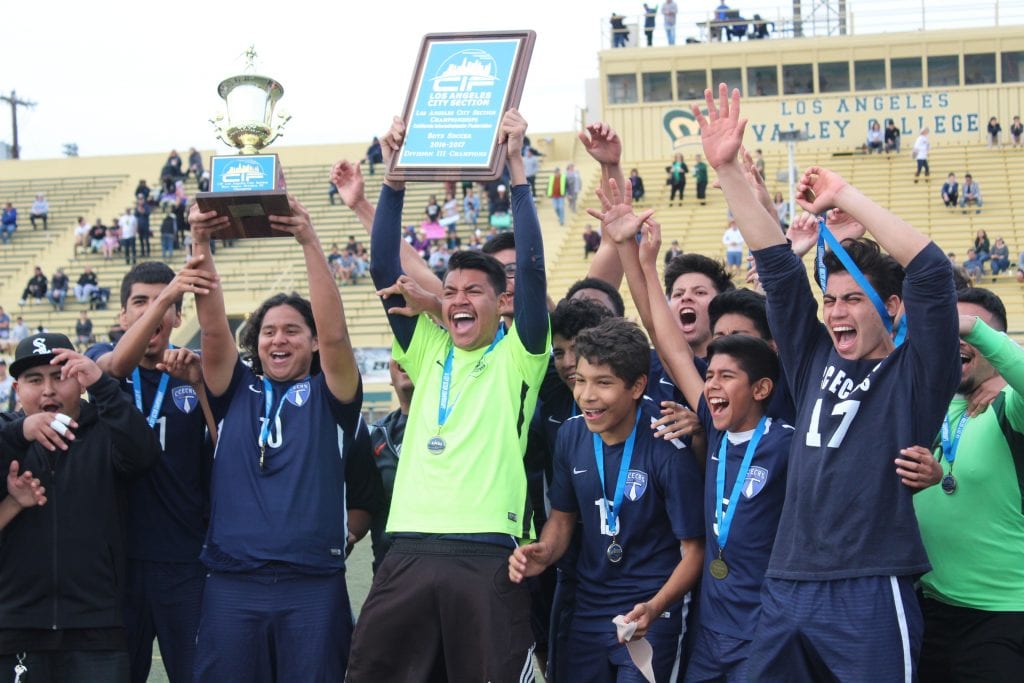 The Hamilton boys soccer team were the aggressors for most of the match in the CIF L.A. City Section Division III championship.

But that didn’t shake Community Charter of Lakeview Terrace in its 2-0 win Saturday afternoon at L.A. Valley College.

Despite Hamilton’s early 7-2 shots on goal advantage in the first 20 minutes of the match, Community Charter goalie Jaime Vazquez didn’t let anything by him.

“I’m a pretty big guy so I can’t be scared. I wasn’t too nervous,” Vazquez said. “It shows the experience that I have being able to do the job I am on the field. I have to have my team’s back all 80 minutes.”

Vazquez got some help when Community Charter’s Andres Gutierrez beat Benjamin Myhr in the backfield.

Two minutes later, it looked like Michael Garcia was going to grab the equalizer for Hamilton with a wide-open net. But Garcia’s kick was too hard and grazed the top of the crossbar.

Hamilton (13-8-3) was moving the ball with ease offensively and kept the pressure on, but went into the break down 1-0.

In the second half, Mark Lopez provided a two-goal lead for Community Charter when his penalty kick beat the Hamilton goalie.

“I just go in calm,” Lopez said. “I go in knowing that it’s just me and the keeper, and it was just up to me to put it in the back of the net.”

Hamilton looked like it had the offensive advantage, but a modification helped the Community Charter defense.

“We just modified our midfield with three players and played with only one forward and tried to hold them back and play the counterattack,” Community Charter head coach Mike Miranda said. “We never seen them play, we never really knew who they were until today. They were beating everyone on the other side of the bracket and we just didn’t want to play them lightly.”

Community Charter returned to the finals after losing to Sun Valley last year.